The Public Interest Group Cancéropôle Île-de-France is composed of 7 member institutions, 14 partners, and more generally groups all the cancer research strengths in the Paris region. In order to successfully carry out its missions, it includes decision making, scientific strategy and scientific assessment bodies. 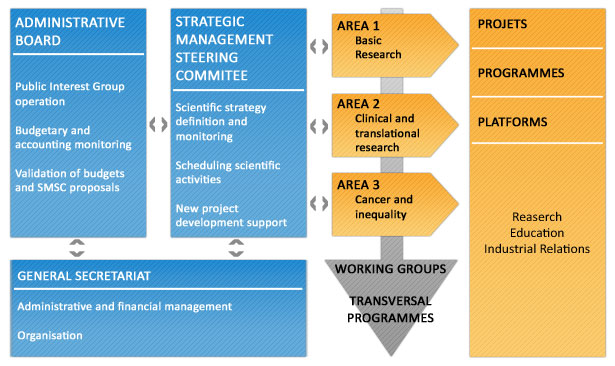 It is composed of representatives that have been appointed by each member for a period of three years which may be renewed. It manages the group and makes all decisions concerning the PIG’s life: adopting the budget, the annual programme, and approves the accounts for each financial year. It also deliberates on the appointment of the Strategic Management Steering Committee’s members and on the group’s operation.

It ensures the group’s operation under the authority of the Administrative Board. In relations with third parties, the Secretary-General commits the group by any act falling within its purpose.
> Administration